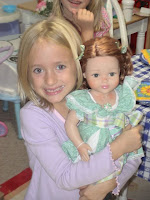 I have to brag on my children for a moment. Yesterday I pretty much let them have the day. Except for cleaning up their fort before the party, they did not have any chores or requirements. Last night I was so tired that I went to bed at 9:30. They were both playing on the computer, so I told them they were to be IN BED by 10:00. I had visions of them staying up until 3:00 am like they'd done before and wondered how often I would have to repeat myself before they got into bed. But, they did what I asked! I couldn't believe it. I don't know what time they actually went to bed, because I was pretty out of it. But all was quiet when it was 11-something, so I'm pretty sure they hit their mark. They were probably worn out as well, but I'm going to take it as they just decided to give Mommy a break and obey the first time. I love my kids!
Posted by Evie at 5:24 AM