Yesterday we visited Museum of World Treasures in Wichita, KS. I had never been there, although my daughter went with my mother about four years ago and had a great time. My daughter and I went with one tour group, and my son went with another tour group with children a bit older. I really enjoyed the visit, but my daughter did not. At all.

The museum is FULL of artifacts. From dinosaurs to mummies to war memorabilia...I don't think anyone would leave disappointed. Leave that to my daughter! I had a great time, and could have stayed longer, reading the plaques on the wall and seeing all the things you can certainly catch a glimpse of online, but this was RIGHT THERE...in front of you...bringing history alive! And therein lies the problem. 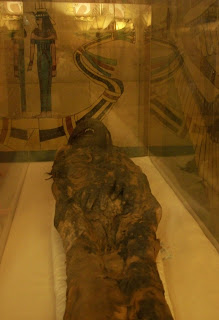 My daughter is ten years old. Even at home, she turns away from any negative images on tv, or something that might give her nightmares. I commend her for being so intuitive to realize that what she is exposed to can have an impact on her, and then self-regulating that. I did not expect the museum, however, to have such a negative impact on her. The tour began with the dinosaurs, which she felt a little icky and probably scary, the way they have them set up and the size of the T-Rex. Next came the mummies, which apparently started the thoughts in her head, and it got worse as the tour progressed. She was feeling "sick," had a headache, "not well." When we were in the simulated "bunker" she told me how she disliked it also when she was six. She did enjoy getting to hold some of the artifacts, but we were in a room set off away from the main part of the museum and it looked like a meeting room with big round tables. I didn't get to stay in the museum as long as I wanted. The tour was 1 1/2 hours, but we still had time to look around ourselves. She was ready to get the heck outta there!

I remember when I was younger, and I was just like her. When I was 22, I saw Forrest Gump in the movie theater and had to leave during the war scene! There are actually a lot of kids like this, but we tend to ignore it or write it off. These kids are VERY intelligent and VERY intuitive. That said, I had to tell my daughter why it is important for us to learn history. Too many Americans bury their head in the sand and ignore what's going on. Many have no clue what really happened in our past because they either were never taught, or they have forgotten because they don't care/don't want to know. I explained how we can't see history repeating itself if we didn't learn the history to begin with, and that is why it's important to have the knowledge. She accepted this. But I'm pretty certain she will be learning her history from books from now on, as being around artifacts was overwhelming to her and made her too sick to learn the information.

One thing that I always look for in museums is whether they provide a creationist perspective or evolutionist perspective. We were on a tour with our Christian homeschool co-op. So the tour guides did a great job, especially considering that the dinosaur information was definitely not from a young earth perspective. If you are a diehard young earth creationist, you will still enjoy the museum. The plaques for the dinosaurs were the only part I noticed with "millions of years" and there was another reference that was a little bit off referencing 10,000 years, but I'm not going to be too picky about that. If you are studying presidents, there is a great exhibit with general facts for each president. We also got to see the Declaration of Independence (not the real one, but a really old copy!) They also have a great section on World War I and II. I admit this part was a little overwhelming for me as well, but from a creationist perspective, these parts are not affected, and will definitely bring alive history for your students studying the US or wars.

One of my favorite parts is the piece of the Berlin wall. I was able to share with my daughter how her grandmother grew up in East Germany and snuck over to West Germany on "vacation." She never returned. Well, not until the wall came down, and then she returned to find everything virtually identical to the way it was decades before. I think everyone can find their own little piece of history at World Treasures. Just keep in mind, it might be too much for some. But it won't stop me from returning on my own!

Here is a picture of a great map I took that you might find useful. I love how they combined current and past place names. 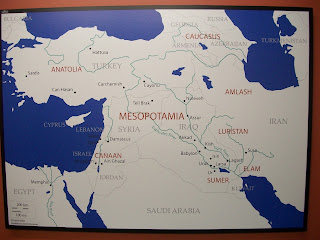 We're so glad you enjoyed your visit to the Museum but sorry your daughter found it overwhelming. Children learn about history in many different ways, and for some the presence of artifacts like the mummies is a little much. We hope she will return again when she is a little older and have a different perspective. Thank you for your support to the Museum, we hope to see you again!

I will definitely be back soon!