Hydrogen Peroxide Can Do That?

You probably already know a couple of good uses for hydrogen peroxide ("peroxide"), and there is a list going around with a plethora of uses for it. But I don't think these two are spoken for yet. I use peroxide for EVERYTHING, so it's my go-to product when germs or bacteria might be causing issues.

When I washed off my vacuum cleaner filter recently, I noticed it had a mildew smell once it dried. I couldn't just pop it back in, so I decided to see what would happen if I squirted some peroxide on it. All I can say is "Eeeeewww." It BUBBLED like crazy. And it bubbled out caked on dust that I thought I had rinsed off! I let it bubble out, rinsed, and then doused it with peroxide again and rinsed. When dry, the smell was gone. GONE! I couldn't believe it. I mean, I'm not sure why because I use it all the time, but it still amazes me.

I also use peroxide for my flip flops when they get stinky. So when my son's entire room made me gag because of the stench of his soccer shoes and shin guards, I got out my handy dandy bottle of peroxide. I removed his shoe liners and doused them in peroxide. No kidding, they practically started bubbling before it hit them. I think they even smoked. I squirted some on the inside as well, which bubbled, but not as drastically. The shin guards came out smelling like new, but the inside of the shoes will need more treatments than we have time for right now. Going forward, I will make a habit of removing the liners after practice and treating them once a week with peroxide. I will be spraying them with a concoction of essential oils as well. 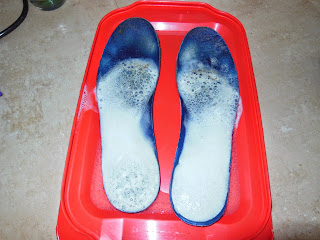 Anyway, just thought I would share these two tips because I know it will help keep your house and shoes germ-free. Of course you can clean with peroxide as well. I regularly soak my sponges with it. It is SO cheap, and such a great staple to keep on hand for its many practical uses. Oh yeah, it can be used for boo-boos as well! ;)
Posted by Evie at 12:13 AM