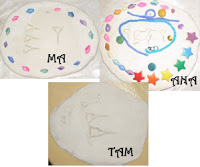 Recently while studying ancient Egypt, we made our own clay cuneiform plaques with our names on them. Of course, my daughter and I had to decorate ours with colorful shells and stuff. My son is going to paint his, but right now it's plain. Because hieroglyphs (and later cuneiform) took longer to carve, they used fewer letters than we do today. For instance, "Anna" would have been written "Ana". "Thomas" would be "Tomas." Why throw in the "h" when it's not necessary?

Just before this project, we saw a Little House on the Prairie episode where "Pa" carved someone's name into a rock. Being television, it looked like it only took him a few minutes to carve. I don't think children can appreciate how long it took the Egyptians to carve into rock!

The clay we used was pretty nice to work with. It is the "Air-Dry Clay" from Crayola. It is very similar to the brown clay I used in school that had to be baked, but it is white, and does not have to be baked.

Our next lesson was on mummies. I had bought this book that is SO cool and had to share it. It will be useful for years, as the kids read more and more of the information that is available. There is a lot of information there! Basically, it opens up and each page you turn removes a part of the mummy, until you get down to the actual skeleton and the canopic jars showing the organs in them. The pictures I've taken are just a couple of the pages. Hopefully this is enough to give you an idea of what it provides. The kids loved this book and were eager to get through their lesson so that they could look at it. And that was before they knew what it would do! My son looked at it for an additional twenty minutes or so, mesmerized by everything he could learn! Here it is: 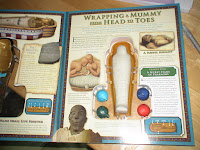 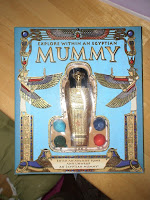 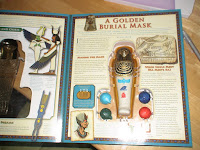 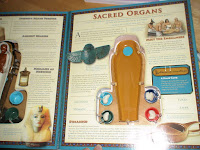