Our Visit with Santa

This year, our visit to Santa was a little different. In past years, at least one of my two children were very hesitant to visit Santa. They go in boldly, then shy away the closer they get to the "big guy." But this year, there was only minor hesitation, and that was only regarding who would go first. They both stared at him in the little house on Main Street, as they argued in whispers about who should go first. (As if Santa couldn't hear them from 3 ft away!)
Anna went first, and shared the note that she had written for Santa. She had three items on her list and she read it to Santa. She would not look him in the eye. She is not a shy child, but I think that Santa, the all-knowing, all-seeing man was too close for comfort! When it came Thomas' turn, I noticed how he would not take his eyes off of Santa's face. This is VERY odd for Thomas. He normally does not make eye contact unless he knows you and decides to let you into his world (he's very picky). I decided that he was simply growing up and getting over his fear of the Big Man. When we got into the car, the first thing he said was, "Santa sure does sound a lot like Mr. John at church!" (He was).
"Really?" I asked. "I hadn't noticed."
The best thing is that since "Mr. John" is our pastor, he knows their names when they walk in the door, which totally baffles the kids from the get go! Here they are: 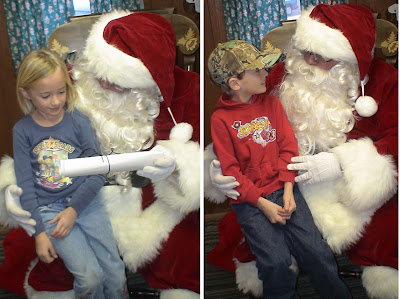