Learning About Pyramids- and Building Them 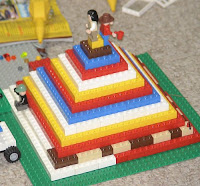 Last week we learned about pyramids and how they were built. It never occurred to me before, but what I learned is that during the annual flooding of the Nile, the men would build the pyramids as a service to the pharoahs, sort of like working off a tax or debt. It's really amusing how much work they put into building something that would serve as their burial grounds and a place to hide their "stuff." And yet their stuff (and sometimes their mummies) would get stolen at some point anyway. It's not much different from our government officials doing things that are pretty pointless and getting paid nicely for it.
I have really gotten into learning about creation science and the book of Genesis. It's funny how looking at Genesis differently affects how I look at the new stuff we learn in school. I can only imagine the benefit Christian kids in public school would get if they were taught in this way.
Anyway, at the end of our study on pyramids, we built one with Legos. My daughter and I built the one in the picture, and my son built a burial chamber that was not pyramid shaped, but had guards and other fun stuff. We played Legos for a long time and had a lot of fun.
Posted by Evie at 8:49 PM