Last week, my kids and I went on a trip back "home" to Georgia. In all, it's about a 17 hour drive from where we live in Kansas. Oh, did I forget to mention that we brought our dog along, too? I bet you are expecting the rest of this post to sound a bit like a nightmare, and I'm sorry to let you down! The traveling part was actually no big deal at all! Yes, my kids tend to fight. And they also get along really well. And no, I don't know what it is about them, but they have always traveled quite well. I wish I knew the secret to offer to parents whose kids whine, complain, argue, etc. from the backseat, but in 17 hours, I heard very little. And let me remind you...a good portion of the trip is through what some people call "boring" Oklahoma and Kansas.
On the way out, we were in the car by 4:40 am. My son stayed up all night, so he was asleep within 30 minutes. My daughter, who had gotten a couple of hours of sleep, held out a little longer. She was also the one who woke up when I stopped to get gas the first time, and of course, had to potty. It was snowing! About six hours into the trip, they were both awake, and we listened to music from my mp3 player. (In case you don't know this, for older vehicles, you can get a thingy that plugs into the cigarette lighter that allows you to play your mp3 player through your radio.) We had already been through snow, freezing rain, and now RAIN. As a matter of fact, it rained the rest of the trip and rained for three days once we arrived in Georgia.
Just past Little Rock, Arkansas, my van engine started rattling. This terrified me since I had just had $1300 of work done on my 14 year old van! I pulled off an exit where there were 4-5 visible hotels. I figured if we were going to get stuck somewhere, this would be the place! I went to one hotel and asked where there was an auto shop. They directed me about two miles away, and when I got there, I wanted to turn around and leave. It was a dump and scared me! Luckily, they did not work on Nissans, but directed me to another shop at the next exit. The man who helped me had most of his teeth and this shop was much less scary! After driving it 40 miles (with the dog still in his crate in the van!) the man came back and said that there was no rattling, but perhaps I had gotten some bad gas and it had worked its way through the system? YAY!!
After that, (and because I had only gotten two hours of sleep the night before) I decided we should stay overnight in West Memphis. We found a decent Motel 6, which was close to Waffle House, and they are pet friendly. Yay again! But I did learn something that might help you...make sure you tell them that you want a room with Wi-Fi if you need it. They had a big red sign that read "Wi-Fi here" or something like that, on the outside of the hotel. But once we got settled in and we needed the activation key to get online, we found out it's only available in certain rooms! Unfortunately we had a new girl check us in, and she neglected to ask if we needed it. Fortunately I was too tired to care too much and I fell asleep before 8 pm. The room was about $40 and decent enough. A great place to crash just to re-charge and finish the trip.
The next day, we were supposed to go through Tuscaloosa and see a gymnastics meet between Alabama, North Carolina, and OU (University of Oklahoma). The kids decided to skip that and go directly to their uncle's house, so that's what we did. We went through Birmingham instead and the drive was quick...and then we hit "Atlanta" traffic. We were just in Kennesaw, but if you live anywhere near, you know that it takes forever to get anywhere, and that is why I moved to Kansas! After staying there for a couple of days, and getting treated to Japanese, The Varsity, Chick-fil-a, and the new movie "The Race to Witch Mountain," we left for my sister's house about an hour away.
We met at the Gwinnett Arena, where we got to watch the "last place" Gladiators kick the tails of the first place FL "Everblades." It was SO much fun! 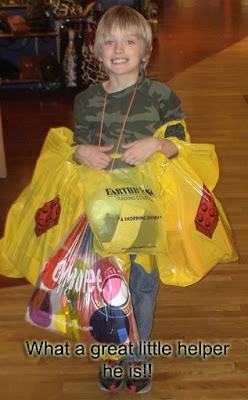 During the rest of the trip I was able to reconnect with old friends, visit my parents, spend some time at Bass Pro Shops, shop at the Lego store, get a tattoo, eat LOTS, swim at a cool indoor pool, and... wow, I think that's it! When I left GA, I drove to Murfreesboro, TN to visit my childhood friend, where we spent the night. From there, it was 13 hours to get home. So we got up around 4:30 again, and drove on a Sunday, all the way home. Other than the people who don't know that the left lane is for passing, (grrrrrrr) the trip was uneventful. The kids didn't even watch any TV during this trip, even though we had two TV's available and some new movies that we bought on the trip (because we brought the DVD player and forgot to bring any movies! d'oh!) When I got a chance to look in the rearview mirror, I saw them looking out at the scenery, and I wondered if they were like me...making up stories about the things I saw out the window. I'd been doing that since I was a little girl. During this trip we saw farmland, lakes, rivers, cool bridges, mountains, and lots of other travelers.

I can't wait to get on the road again. If you have never taken a road trip with your children out of fear of their behavior, just do it! It may work out much better than you expect and you might find yourself a few adventures in the future! 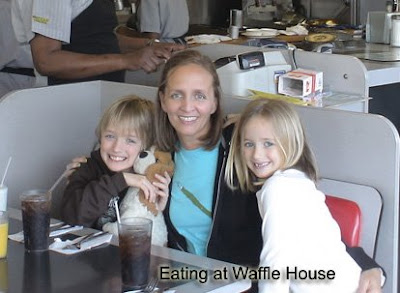