We have gotten more than our share of rain in Kansas and when you have puddles, you have tadpoles! Our friends collected some tadpoles from their wheat field and we were fortunate enough to obtain eight (yes EIGHT!) tadpoles for our "Planet Frog" habitat that had been sitting empty for close to two years. It didn't occur to me at the time that we might actually get them all to the frog stage without losing any, but now, I'm wondering what we will do with eight frogs! The first picture shows my son and daughter watching the tadpoles that we just brought home. 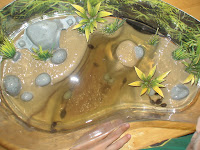 And here is a close up picture of the tadpoles and what they looked like on June 11, 2007. (Click on the picture to see them up close.) They weren't very small, but we didn't know how long it would take for them to morph into frogs. After reading extensively online, we learned that some frogs take much longer than others. We also learned that distilled water was good for the tadpoles' habitat, which was good since we have lots of that on hand! We tried collecting rain water but it was a pain! The Planet Frog habitat proved to be too small for the eight tadpoles because we had to change the water almost daily. So we split them up into two Pyrex dishes and put some rocks from our yard into these dishes. The tadpoles liked to swim under these as much as they could at the edges.

After we had the tadpoles for seven days, guess what appeared? That's right: LEGS!! Well, back legs anyway. The tadpoles still use their tails to get around, and the legs are just sort of there as if the tadpole doesn't realize it. The tadpoles didn't all get their back legs at the same time. In this picture you can see how one has more legs than the other, and some of the tadpoles had nothing at all. You might be wondering what to feed a tadpole. We were told they eat fish food, so we got the only kind available: tropical fish food, which they seem to like. Seven days after the back legs appeared, we spotted some front legs! After hearing that tadpoles in captivity had to get a certain hormone in order to develop their front legs, I did some research on-line. Apparently, the stress of a puddle drying up (for example) releases a hormone which causes the tadpole to turn into a frog, because if it didn't, the tadpole would die without the puddle. So by the time the puddle dries out, the tadpole needs to have all legs to hop out. So what we did was place the "almost frogs" into the shallow glass Pyrex pan, and let the water naturally evaporate so that the hormone would be released. It must have worked! Once the front legs appeared, we noticed that they use these while swimming, and of course, the tail begins to disappear. Once the tails were disappearing, we knew that we needed a bigger habitat for the frogs, and one that had a top. We went to PetsMart, where we got a new habitat and their new food: crickets! I sort of doubted that these tiny frogs would eat the crickets almost as big as they were, but the young man sounded knowledgeable so I went with it. In this picture, you can see how the frogs are losing their tails at different rates. We also noticed that the frogs were developing in pairs. At this point, we had three habitats going: one for legless tadpoles, one shallow dish for "frogs in training" and the frog habitat. We had an assembly line going that seemed to produce healthy frogs! (Or are they toads? Hmmm) The picture of these two frogs were taken 17 days after we brought them home. Time sure flies!

I'm still not sure about the crickets. We left a dead one on the rock for a "frog in training" so he could sort of check it out. I think they only eat them when we aren't watching them (or are they getting out of the habitat?) because they are disappearing, but we aren't sure where they're going! It has now been 25 days since we've had the tadpoles, and the frogs have gotten pretty active.

Yes, I AM wondering what I'll be doing with eight frogs, and I've only promised that we can keep two. The rest we will probably set free somewhere, like the turle that we set free at our lake. The kids only had that turtle overnight and still talk about it (they named it Snappy). We had a frog show up in our backyard one night ("Donut"), and I felt so bad for it that I made the kids let it go in our garden. My 4 year old daughter broke down! She could not stop crying; it was such a pitiful sight. But it made me feel good to know that she has such a BIG heart!

Dear Eveie,We(my 7 year old twins and I)just walked down to our lake and found what had to be thousands of tadpoles.The water was black with squiggly tails,some so tiny we had to really look close.I read your "stay @ home tadpole project and I think we r going to try it.Thanks for all your info!!!!!
If u get this email drop us a line down here in South Florida. madeline090649@aol.com
Nicole...new tadpole mom

Oh, how fun!! Good luck with them. You will probably do a lot of talking about death, so get ready...lol

I just want to make sure everyone knows the difference between tadpoles and mosquito larvae because you definetely don't want to be raising mosquitos. Mosquitos are a lot smaller and make worm-like movements and they also go bottoms up to the top of the water to breathe. Tadpole are bigger and actually swim. My mom evidently doesn't know the difference because she got my daughters some "tadpoles" and had them all excited over the "baby frogs" before I saw them. I had to tell her they were mosquitos then go on a frantic search for real tadpoles before the girls noticed!

That is hilarious! I almost made the same mistake. It took me a minute, but I realized it didn't make much sense for tadpoles to be in a little swimming pool. (How did they get there?!) LOL Glad you realized her mistake. That would not have been good!