A few days after Easter, my daughter came to me and asked if she could have some of her chocolate bunny. The bunny was solid, dark chocolate, and I didn't think anything of it as I sent her on her way with the bunny in hand. She came to me a few minutes later, bloody tooth in one hand, and her bunny in the other. "My tooth fell out!" she cried. At first I panicked, because she didn't have any loose teeth ready to come out. "Was the bunny that hard?" I wondered. Seeing visions of a toothless child with teeth falling out all over the place, I remembered that she had been complaining about her two bottom teeth hurting. So I checked the other one next to it, and sure enough, it was loose. Since it wasn't to the point of hanging on by a thread, her tooth coming out was a total shock.
I wanted to take a picture to commemorate the "big event" so I put her in front of the window and she showed me her missing tooth. Later when I downloaded pictures, I learned that she and Thomas had taken pictures of each other with their bunnies, as they didn't want to eat them unless they could "preserve" them. So essentially, I have a "before" picture, and an "after" picture. It cracked me up. The pictures are so similar, as if I planned them. 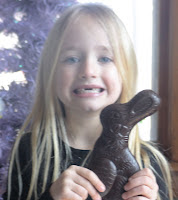 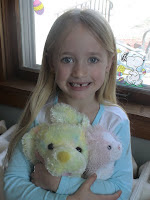